Today we’ll hear from Murray who is telling us of his experiences in India working with Freeset (Tranzsend).  As small groups it would be great by starting to read Acts 3:1-8 (or 3:1-10).

Imagine Peter reaching down to give a hand up (not a hand out) to the beggar.

How has Murray been reaching out to give a hand up ?

For discussion : How do we do this ?

Modern Jewish folklore tells a story about a young rabbi who was hired to work in a town in Eastern Europe. On his first day in town, a town leader gave him a tour of the village.Passing by the cemetery, where all of the town’s rabbis were buried, something became frighteningly clear. According to their headstones, his rabbinical predecessors seemed to have died at young ages, 27, 25, 22. Not one had survived past 28.
The new rabbi started to sweat, believing the community was so difficult that it was killing off its rabbis before they hit their 30s. Sensing the young rabbi’s growing panic, his guide explained the community’s custom: Each person keeps a notebook and records how many hours they spent in service of God and in service of others — the number of hours living spent giving instead of taking. “And then at the end of a person’s life we add up all of those hours, and that is the number we put on their headstone,” he said pointing at the numbers – 27, 25, 22. The numbers on the gravestones, he explained, did not represent the years of these rabbis’ lives, rather the number of years they truly lived their lives by helping others. “All of these rabbis died in their late 80s or 90s,” he said.

(well what number would you dare claim ?)

People who dedicate their lives to something larger than themselves have learned that the dates of one’s birth and death are far less important than the long dash in between. Make these people your teachers and your friends. Marry them. Or just be one of them. Because in the end, there are those who take even when they are giving, and those who give even when they are taking. Now is the time to start deciding: Which are you? And who do you want to be?

Legend teaches that each morning when we wake, we are given the world anew. And eac 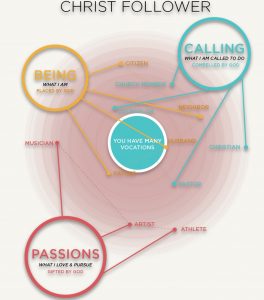 h night as we go to sleep we must return it. When we do, our Creator asks us, “What did you do with my creation tody? Did you add to my world or diminish it?”
Great words from Rabbi Will Berkowitz how do you feel when you read them. Think about this week – have you added or diminished this world ?

Or what about Frederick Buechner’s line ” The place God calls you to is the place where your deep gladness and the world’s deep hunger meet. How are you doing at living this way? Look at the diagram(from visual Theology by Tim Challies). What roles do you have ?  What Passions ? What calling ?

Pray for each other to sense better God’s call, and to be that hand reaching out for others.